Hold the Requiem: A Reply to Spyros Danellis

On 8 April Spyros Danellis, a Greek Member of the European Parliament, wrote a piece for protagon.gr  titled “Requiem for ENISA and the European School?” (See the original Greek text and an automatically generated English translation.)

The piece focuses on the fate of ENISA and its implications for the SEEH. ENISA (the European Network and Information Security Agency), was created in 2004 with its seat in Heraklion. Countries hosting major European agencies have a contractual obligation to provide a local European School for the children of agency staff, and the SEEH was founded in fulfilment of this obligation (though it is open to other categories of pupil besides ENISA children).

Mr Danellis notes out that this week sees a surreal pairing of events: on the one hand, protests against the threatened closure of the SEEH, after years of neglect by the authorities, and on the other, celebrations of ENISA’s ten years in Heraklion, with expressions of thanks to the local authorities for their services.

Mr Danellis points out that the school’s problems have been exploited by those in other countries, including Britain, who wish to see ENISA leave Greece and relocate to their own country. The Greek authorities have played into the hands of these people, Mr Danellis argues, by failing to fulfil their obligations and support the school properly. The result has been to make Heraklion an unattractive location for European scientists, who fear their children will not receive a decent education here.

The article goes on to condemn the current compromise arrangement (the result of political manoeuvrings within the Commission) under which the executive branch of ENISA has moved to Athens, the administrative staff remain in Heraklion (in a huge, underutilized building), and new branches of the agency can be opened in other countries. Such a fragmented arrangement will, Mr Danellis argues, lead to the complete exit of ENISA from Greece, and probably to its absorption by a larger agency based in Brussels.

Like many parents of SEEH pupils, I read Mr Danellis's article with a mixture of alarm and and sadness.

Mr Danellis is surely right about some things. I have no special knowledge of the politics (both internal and external) surrounding ENISA’s presence in Herakion, but I know that schooling is a major concern for ENSIA parents, and lack of government support for the SEEH can only help those who wish to see the agency leave.

However, the title and tone of the article did not do much to boost our spirits at a time when we are campaigning for our school and our children’s future. Is Mr Danellis right to be so pessimistic? I can understand that he is frustrated and angry with the Greek government's record of mismanagement and failure. We are too. But we -- the pupils, parents, and teachers of the SEEH -- have not given up hope.

I respectfully urge Mr Danellis to look through this blog: to look at the photos (such as these and these); to watch the videos of our demonstration and celebration; to listen to the children's letters to the Prime Minister and their the multilingual appeals for their school (here, here, and here); to hear our pupils celebrate their different national identities (also here); to listen to Maria talking about her school, Harry making a trilingual appeal to the Education Minister, and 4th and 5th grade students explaining what their school means to them; to enjoy the English section-students singing Theodorakis; to check the nearly 3,000 signatures to our petition; to review the supportive press coverage we have received; and to read the extracts from the inspectors' audit, in which they praise the teaching staff and management and call the SEEH a school with soul. Does he not draw some inspiration from all this? Shouldn't he join us in celebrating this school and fighting to the very last minute for its survival, instead of gloomily heralding its demise?

But would that be realistic? I think so. There many points that could be made. Here I will make just two.

First must ENISA leave? In many respects Heraklion is the ideal location for it (it wasn't chosen by accident in 2004). The city is the home of both the University of Crete’s Department of Computer Science and FORTH’s Institute of Computer Science -- world-class institutions working in areas closely related to ENISA’s activities. The agency has a purpose-built, well-equipped home on the beautiful campus at Voutes. Heraklion has a rich cultural life, a beautiful climate, excellent connections to the mainland, and so on. Apart from the the school’s problems, what reason is there for ENISA to leave? So why not fix the problems and save the agency for Heraklion and Greece? (Mr Danellis is surely right that if the agency leaves Crete, it will leave Greece too.) With political will, it could be done.

Here it is crucial to bear in mind the distinction between two types of European School, Type 1 and Type 2. Type 1 schools are run by the European Schools intergovernmental organization, whereas Type 2 schools are run by national governments and are only accredited by the European Schools organization. (See this list of Type 1 schools and this of Type 2, accredited, schools.) (This distinction is important when considering accusations of elitism. Some people (rightly or wrongly) regard Type 1 European schools as elitist, since free admission is limited to children of staff working for Community institutions or diplomatic services, and other parents pay high fees. But Type 2 schools are quite different; they are part of the host country's national state school network and no fees are charged.)

Now, the SEEH is a Type 2 school. So (as I understand it), it could stay open without ENISA, provided the Greek government continued to fund it and it continued to offer the curriculum of Schola Europaea and to be accredited by the European Schools organization.

Moreover, there would be a very strong case for this to happen, even if ENISA left. Heraklion hosts many other research institutions with international reputations, including the science and medical faculties of the University of Crete, several institutes of the Foundation for Research & Technology - Hellas, the Hellenic Centre for Marine Research, and others. It is a cosmopolitan city, with worldwide business connections. It is home to two first-division football clubs, with international squads. It is a major Greek and mediterranean city, and it attracts researchers, students, artists, business people, and sportspeople from around the world -- or would do, if there were a good international school here. A city like this deserves and needs a European School.

But don’t take my word for it. Listen to Professor Evripides Stefanou, Rector of the University of Crete; to Professor Nektarios Tavernarakis, Head of the The Institute of Molecular Biology and Biotechnology (IMBB-ITE); to Dr Christos Tsatsanis, Vice Dean of the Medical School; to Dr Dr Eleni Vasilaki, President of the Department of Primary Education, University of Crete. Listen to the words of the the Governor of Crete Mr Stavros Arnaoutakis and the Mayor of Heraklion Mr Ioannis Kourakis. And listen to the voices of the SEEH itself.

Isn't this worth preserving, and therefore worth fighting for? Please Mr Danellis, if you represent us, represent our hope too -- and join our fight.

Keith Frankish is an Adjunct Professor with Brain and Mind Program in Neurosciences at the University of Crete and father of three pupils of the SEEH. 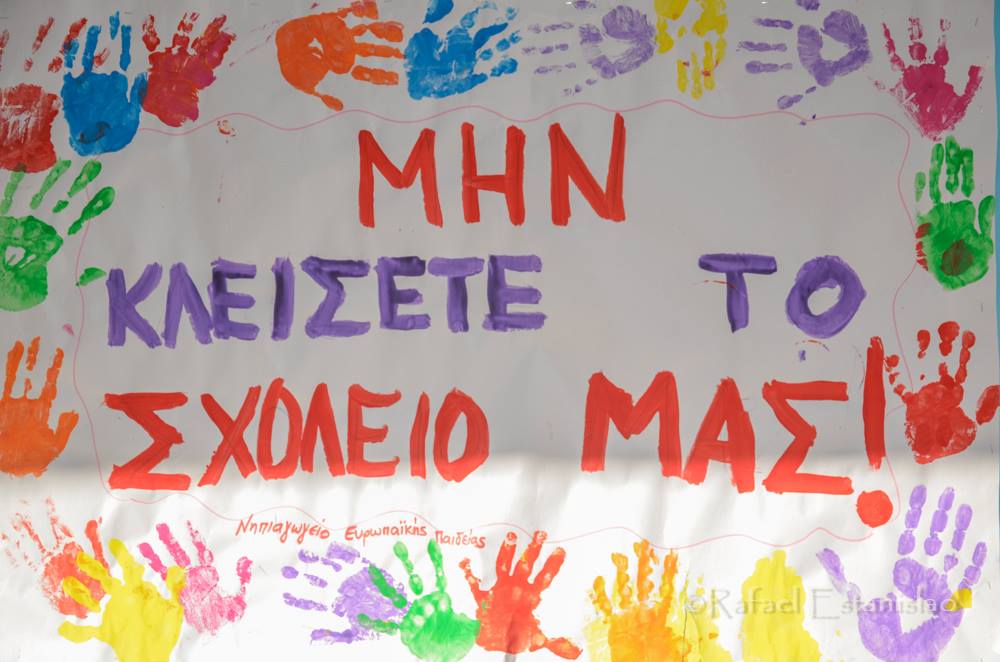 HELP TO SAVE THE SEEH BY LEAVING A MESSAGE OF SUPPORT

Images from our school